Bad Bunny didn’t need to strap himself to a fake palm tree and fly just over the heads of his audience to make anyone feel close to him Friday night.

To be clear, that’s just what the Puerto Rican singer and rapper did near the end of his sold-out concert at SoFi Stadium — a fine bit of stagecraft in a road show, not inaccurately billed as the World’s Hottest Tour, that also featured fireworks, fog cannons and a pair of giant, drone-propelled inflatable dolphins.

Yet Bad Bunny’s special sauce as a pop superstar is the intimacy of the bond he shares with his fans, many of whom call the 28-year-old by his real first name, Benito. Through his quirky charm, his expansive ideas about gender and sexuality, his dedication to the needs of his homeland — and, of course, through his music, which feels deeply personal and attuned to history at the same time — Bad Bunny has cultivated an international following whose intense devotion has a kind of tight-knit familial vibe. People know him (or believe they do); more important, they believe he knows them, which is why SoFi erupted when he shouted out some of the many countries — Mexico, El Salvador, Cuba — to which members of the crowd could proudly trace their roots.

What’s all the more remarkable about this sense of mutual belonging is that it’s only increased along with Bad Bunny’s fame since he scored his first chart hit in 2016. Friday’s show was the first of two at the cavernous SoFi to wrap the U.S. leg of his tour before he heads to Latin America for another couple of dozen stadium dates behind his latest blockbuster studio album, “Un Verano Sin Ti,” the biggest LP of 2022 by far and the reason Bad Bunny is the most nominated act at next month’s Latin Grammy Awards. (“Un Verano Sin Ti” — which pulls from reggaeton, bachata, hip-hop, dembow, synth-pop, mambo and reggae — is widely expected to pick up a nod for album of the year at 2023’s non-Latin Grammys, in which case it would become the first Spanish-language project to be nominated in that category.)

This week the L.A. City Council even designated Oct. 1 as Bad Bunny Day, with Councilman Kevin de León saying that the artist’s “cultural impact will have a tremendous and positive influence on future generations and will redefine Latino culture in Los Angeles for years to come.”

This level of fanfare can make a guy go all Bono. Before the flying and the pyro, though, Bad Bunny began Friday’s 2½-hour performance chilling in a beach chair next to a basic red-and-white cooler on a set designed to look like a beach. All night he carried himself casually but with enough swag to show he relishes the privilege of his fans’ adulation; his tender baritone vocals — which he delivered into a microphone customized to resemble the sad-heart figure on the cover of “Un Verano Sin Ti” (whose title translates to “A Summer Without You”) — had a conversational quality, as though he were trading confidences with tens of thousands of his closest friends.

At one point he sat down onstage with 20 or so dancers — men and women of varying racial backgrounds and body types — and passed around a bottle of wine as he sang “Yo No Soy Celoso,” a winsome acoustic ballad about romantic jealousy. Moments later, Bad Bunny was back up, bouncing around to rapid-fire snippets of his harder-edged Latin-trap oldies. In both modes his lightly held charisma made the stadium feel somehow smallish even as the Bad Bunny bracelets his team had handed out twinkled all the way up toward the roof.

To what ends does Bad Bunny use this special closeness? He’s challenging conventional notions of masculinity, as in a gorgeous rendition of “Ojitos Lindos,” about someone rediscovering his feminine side, for which he was joined by the song’s featured guest, Liliana Saumet of Colombia’s Bomba Estéreo, who wore a pink overcoat emblazoned with a fabric vagina.

He’s laying out a clear musical lineage — especially valuable in an era when digital streaming has made it easier than ever to take an ahistorical view of pop. (Think of “Un Verano Sin Ti” alongside Rosalía’s “Motomami” and Beyoncé’s “Renaissance” as key artifacts in a developing push among A-list stars to show their reliance on the work of trailblazers.) At SoFi, Bad Bunny brought out several important figures from reggaeton’s past: Chencho Corleone of Plan B, Jowell y Randy and Ivy Queen, the last of whom he gave the stage so she could do a brief performance of her own.

He’s also — and maybe here’s a touch of Bono after all — advocating for political change. For his next-to-last song, Bad Bunny performed the throbbing and rave-y “El Apagón” (or “The Blackout”), which he wrote after a private company took control of Puerto Rico’s vulnerable power grid last year — and which felt all too relevant Friday given the island’s recent power failures in the wake of Hurricane Fiona. The song is a furious critique of colonialism and its legacy, and Bad Bunny followed it by inviting a live drummer and horn players to help him close the show with an extended jam on “Después de la Playa” — a horny post-swim come-on in which the musicians, and the audience, found ecstatic solidarity. 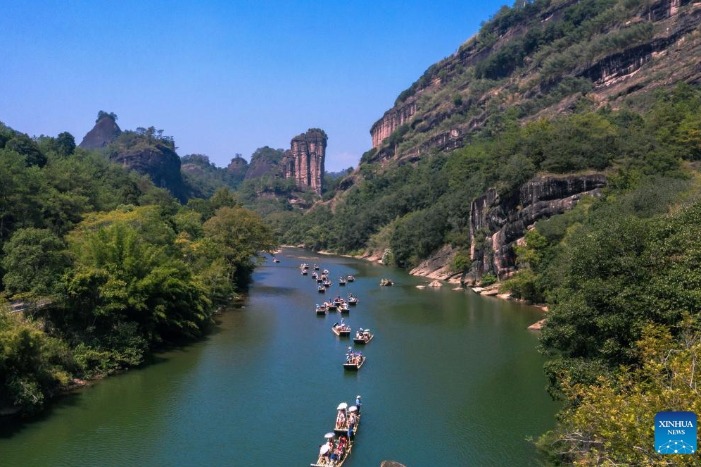